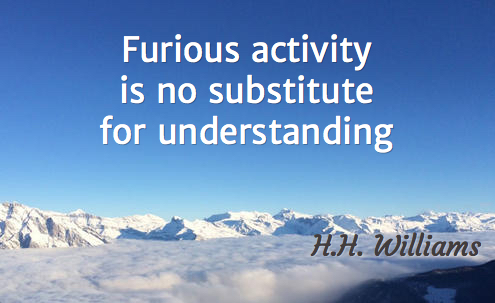 You might hear this a lot from people. You might even be the type of person who says it a lot to other people. “Just Do It”. “Be in action”. “Doing something is better than nothing”.

Mostly, people are just trying to be helpful. Only it’s not really helpful because if it really was that easy, well, you’d have done it, wouldn’t you? I mean, if the solution to your ‘stuckness’ was simply to do something, anything, well, you’d do it and you wouldn’t still be stuck.

I used to find these empty exhortations really irritating. Sometimes I would succumb and just do something. It never worked out well. I lacked understanding, I lacked intent, I lacked commitment.

There are times, of course, when we are able to simply move into action. Sometimes we completely overcomplicate things and make them seem impossible to achieve. It’s a form of procrastination. It’s what Steven Pressfield, in his book ‘Do the Work’, calls “the resistance” concealing itself behind false logic and imagined terrors, stopping us from sharing our gifts with the world.

You can push through ‘the resistance’. You can ‘just ship’. It will certainly help to move you forward but it won’t necessarily get you unstuck.

Being stuck is the manifestation of a deeper turmoil, an inner conflict that you have not yet resolved. It may be something from the past that you are holding on to and that is pulling you back. Or it maybe a fear of what lies ahead that is preventing you moving forward. You are stuck in the Neutral Zone, in the wilderness, feeling lost and confused.

Whatever this deeper problem is, glibly spouting the slogan of an international sportswear company is not going to suddenly spring you free. If you are like me, it will give you the sudden urge to punch someone in the face and say “well, I you told me to just do it, so I did. How do you like them apples?” (If you are like me you will resist that urge and just roll your eyes instead).

I am not recommending that you do nothing. Quite the opposite, you have to put in the hard yards to find your way through the wilderness and out the other side. You must focus on getting down to that deeper conflict, to identifying and resolving that inner conflict. In the sense of ‘Just’ meaning ‘Only’, then yes, just do that.

That’s not what they mean, though. They have no interest in helping you dig into your stuff, they just want to look smart and show you how better than you they are.

So ignore them. Running around doing random things to make them happy isn’t going to help anyone.