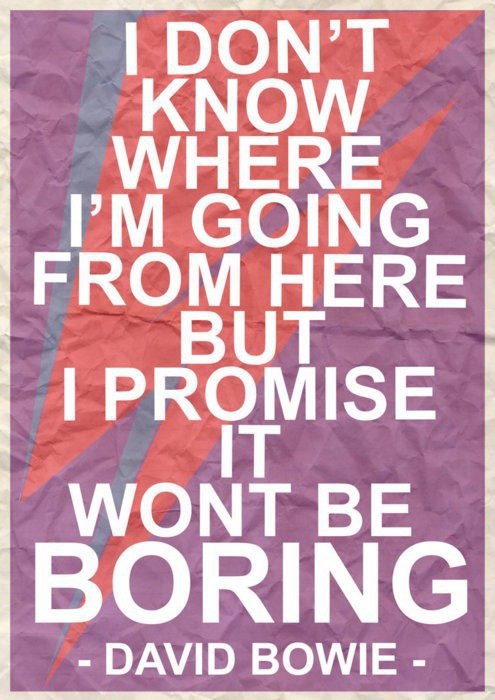 A star has gone out in the sky with the passing of David Bowie, a rare talent and modern-day icon. Alongside his musical brilliance he will be remembered for his numerous re-inventions, moving from one persona to the next as part of his artistic renewal.

Bowie was an absolute genius at re-imagining himself and had a shape-shifting quality that has been copied but never equalled. He showed us all that it is possible to change everything and retain your integrity, to be completely different and yet remain the same. He showed us that there aren’t any boundaries except those that are in the mind, our own and others.

So, for us Post Executives who need to re-imagine ourselves after leaving the Mothership, it’s simple. Be like Bowie! He’s showed us the way, we just have to follow.

Well, simple is not the same as easy, is it? That sort of change and transition is hard work, challenging and frightening and dangerous. It’s OK, you don’t have to wear make up and outlandish costumes (although if you want to, that’s absolutely fine too. Channel your inner drama queen and all that) but you do have to put in the emotional effort to explore the possibilities and to take some risks and experiment.

It probably not something you’ve done before or even contemplated. It certainly wasn’t on my life plan, such as it was. I joined a large corporate and expected to see out my career there, either with that business or in that environment. By the time I hit my forties I had a family and a mortgage and I was not looking for any big changes.

In fact, when I started work the expectation was very much that you were ‘set in your ways’ by then. Middle age, middle management, middle of the road, that was the norm. It was still the scientific view that you had probably learnt all you could by then and would stay the same until you retired. The adage was that “You can’t teach an old dog new tricks”.

We now know that the mind has plasticity and we can not only learn new things throughout our life but change the way our mind operates, creating new neural pathways and patterns of thought. It wasn’t until as recently as 2012 that Carol Dweck wrote about the concept of a growth mindset, that our qualities were not fixed but could be developed by us.

Although seeing Bowie go through his transformations and prove it as possible to re-imagine ourselves, we thought “not for us”, such is the drag of these earlier ideas about personality and qualities and life patterns. But now, it yes, for us. Change is not only possible, it’s essential. It’s not a threat, it’s glorious opportunity. And with the right knowledge, help and support, you can grasp it.

Go on, admit it. You’ve always wanted to be a bit like Bowie. Now you can be.