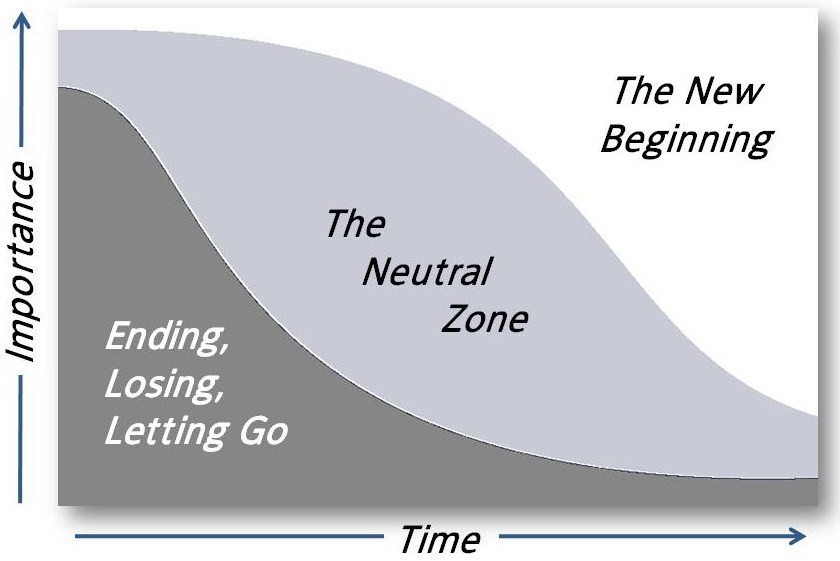 I called this blog ‘After the Mothership’ because it is about what you go through after a significant event, namely the end of your corporate career. It is about that transition, not about the change that caused it or the thing future you have yet to realise, but the process that you go through to bridge between the two.

I’ve been working my way through this process for some time and the mental model I like to use is the one first described by William Bridges in his excellent book “Transitions”. He was one of the first to write about this back in the 1980s and, whilst many others have addressed this subject since, I like the elegant simplicity of his 3-stage model.

Bridges starts with an important distinction between change and transition. Change is the thing that happens to you, whereas transition is the internal process you go through to come to terms with a change, to let go of things from the past and re-orientate yourself to the new circumstances.

Change, such as re-organisation, redundancy, moving jobs, is given. Transition, however, is not. Each person’s  path and experience is unique and can vary widely in duration. Some do not achieve transition at all and will seem to repeat certain events in their lives, like having a string of personal relationships that fail for the same reason, or a series of jobs that follow the same pattern.

Bridges goes on to explain that there are three stages to transition:

Ending is about letting go of the past, giving up on attachments and emotions connected to the previous situation. This can be extremely difficult, particularly if the change was not your choice. However, if you don’t let go you can never complete the transition because the emotional connections to the past will hold you back.

The Neutral Zone is a period of confusion and anxiety, but also innovation and creativity. You have to figure out how fit in this new world, what you have to unlearn from your past and what you have to add. It’s a period of re-invention and it is very challenging. This period can be quite short or may take several years, it really depends on you.

Finally, you re-orientate yourself and see the new possibilities and opportunities. This is your New Beginning, which you approach with energy and enthusiasm.

All too often we get stuck in one of these phases. We fail to let go of the past because we are unwilling or unskilled at exploring out emotions, so we ignore them and continue with our previous behaviours. Or we find the neutral zone to uncomfortable, we are unable to tolerate the ambiguity and uncertainty. the anxiety and confusion is just too much for us. We cut short the process and instead plunge straight into a new job, a new venture or relationship.

However, because we have not internally processed what has happened to us (the change) and have not learnt from it and changed our mindset or behaviours, we make the same errors and mistakes in the new situation. Added to that, we now have the emotional baggage from the incomplete transition dragging us down as well.

It’s not to hard to see work out that after a few cycles of failed transitions, we are weighed down with so much emotional baggage that we are practically immobile. We are stuck, often in the very uncertainty and emotional turmoil we were seeking to avoid.

Well, who knew? I certainly didn’t because no-one had ever told me about these things. No-one ever spoke of the hard emotional labour that is needed to work through these transitions.

Quite often I was actually in denial that I was in a transition, that a phase of my life was ending. As for the Neutral Zone and staying is a state of uncertainty and ambiguity, that was to be avoided like the plague. I had been taught to deal in certainties and clarity, no good would come of confusion.

These are common, if unhelpful, reactions, driven by society’s beliefs and pressure to stay the same. However, now I know that once the process of transition has been started it is vital that we complete it and internally process out emotions. These transitions offer us the opportunity for recovery and renewal, to expand our sense of reality and deepen our purpose. This enrichment ourselves and our lives is one of the gifts that is to be granted to us at the end of the process.

That process is seldom easy and there are not any short-cuts and but it is an essential part of re-imagining yourself so that you can move towards a better future.

3 thoughts on “Transition is the key to re-imagination”