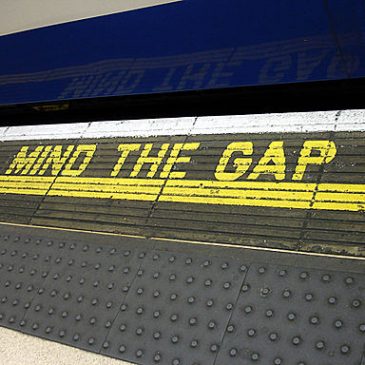 Some of these differences are obvious, like not having a regular salary and other benefits but also being able to decide your own priorities and work habits. Some are good, some bad.

There’s also a lot of less obvious stuff, to do with your mindset and perspective. For me, these are the important differences, this is the real gap that you have to jump across.

I’ve been thinking about this for some time and I see it as more of a continuum between the fully-paid up company stormtrooper at one end (that’s the employee) and the full-on, unconventional, creative businessperson (that’s the entrepreneur) at the other, rather than a divide. Off the top of my head, I came up with this list of attributes (about 7 years ago, in fact) and found that these two extremes were almost complete opposites.

Hardly any of us are at the extremes, by definition, and you could say they are caricatures. However, on the Mothership we tend to be nearer to the employee end and, to survive and thrive after the Mothership, we need to move more to the entrepreneur end. That’s the journey we face.

We’re often told to focus on our goals and so you might ask yourself how far towards the entrepreneur end you need to get to be successful. This is not the right question because you won’t actually know until you get there. Trying to be as ‘entrepreneurial’ as you possibly can may be setting yourself up for failure and there’s a distinct danger the attempt will nearly kill you!

Instead, the really interesting question is to ask yourself where you are starting from, how far along the continuum are you?. If you are honest with yourself, the answer may shock you.

Now I was a bit of an intrapreneur when I was on the Mothership, so I placed myself quite a way towards the entrepreneur end, maybe even around the middle. I didn’t buy all that corporate bullshit and risk-aversion and conformity. No way.

This was a mistake. It made the gap to being a successful entrepreneur look small and so I got frustrated when it seemed to be taking me so long to make these minor changes.

What I now see is that I totally underestimated the impact of being in that corporate environment for so long. All the time you are being pulled towards the employee end, being pressured to conform and rewarded for behaving like a good corporate stormtrooper. Er, I mean, employee. I just didn’t realise how far that way I had been dragged.

With the pressure from the organisation and your peers, you just can’t help being dragged that way. We know the power of peer pressure from  Asch’s psychological studies in the 1950s but more recent work by Berns in 2005, using brain scanning, found the startling truth that peer pressure actually changes the way you perceive a problem. In other words, it changes the way you think, so that you are gradually being pushed away from your beliefs and intuition without you realising it.

The result is that you just can’t help looking for risk-avoidance rather than opportunity; using process in preference to intuition and creativity; playing by the rules instead of breaking new ground. And it all seems perfectly natural.

On reflection, I can see that my starting position was much nearer to the employee end of the continuum than I was aware and, frankly, comfortable admitting to. So the gap was way bigger than I thought and it was going to take a lot more time and effort to get across it.

You need to know where you are first before you can get to anywhere else. If you are starting your journey from the wrong place, you are not on your journey, you are lost. Be really, brutally honest with yourself (perhaps get a friend or a coach to help you). You might have to admit you are not quite the person you thought you were but only then can you see what you have to do to become the person you want to be.