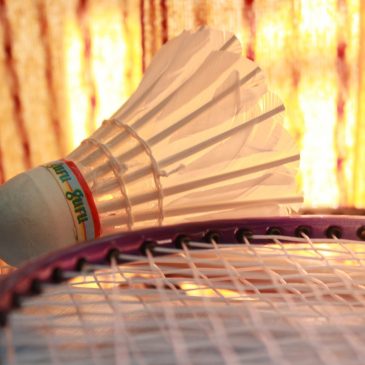 Gail Emms MBE has been a success. A world-class badminton player and an Olympian who won a silver medal in Athens in 2004, along with World Championship mixed doubles gold in 2006 and two Commonwealth golds.

She’s not in that world anymore and in a searingly honest article she has talked about how she has struggled to establish herself since. It’s an account that has echoes for anyone who has been made redundant or had to change what they do in mid-career.

All athletes know that they will retire one day and they will face a transition but it can be hard to cope with when it arrives. For those of us who thought our retirement would be distant and well-funded only to find we are having to start again in middle-age, it’s more of a shock but no less of a struggle. There are many parallels in what Gail has to say in her article and her subsequent interview with the BBC and the experience of those of us who have come out of a corporate career.

“When you first retire, you go through the whole transition and the whole grieving process, and it’s horrible. You don’t know where you are and you don’t have an identity.”

This is at the heart of the challenge. When you leave corporate life or a career path you are starting a transition process. Part of that process is grieving for the life you had expected that is now not possible. We all have dreams and projections of how life will pan out that based on our current circumstances and so when those circumstances change, those dreams die. That person that we were, that identity (in Gail’s case, Olympic badminton player) also dies.

“I feel ashamed and it’s a massive dent in my pride to admit that an Olympic medallist is struggling.”

Shame is a very big part of the challenge we face. We haven’t been Olympic medallists but we see ourselves as people who are professional and capable, who have achievements and make things happen, who are able to cope. To find ourselves struggling jars with this  self-image and the cognitive dissonance arising from this causes us pain. We are ashamed to tell people about our situation and, hidden away, our shame grows and corrodes our spirit.

Gail has taken a vital first step in writing this article and talking about the shame she feels. Shame hates to be spoken and once it is dragged out into the daylight, it loses it power over us. Facing up to our shame and speaking about it is a hard thing to do but it has to be a first step for us too (and I started After the Mothership to create a safe space to do that in).

“I am feeling lost and with no direction, no purpose, no career, no identity and who the hell do I go to? I want to provide for my family, to be a strong role model and feel like I belong somewhere and be part of a team again.”

Doesn’t this sum up exactly how we feel when we have been chucked on the scrap heap through redundancy or our career has come to sudden halt?

We long for direction and purpose in our lives and we often surrender the responsibility for this to others, to the corporation, for the sake of our careers and the pay check. When we leave the Mothership, our purpose, however flimsy it may have been, is taken away and we have to find a discover a new one and fashion a new direction for our lives but we’ve never been taught to do this.

Gail talks of her identity again and it is not an exaggeration to say that we can suffer an existential crisis as we question who we really are and where we fit in the world. This is an essential part of the transition process but no less disconcerting and disorientating for that. It plunges us into uncertainty and doubt and causes great anxiety and even depression.

She also mentions two other key needs that are affected, our need for belonging and for social connection. As social animals we feel compelled to gather together, which is what caused us to form into tribes back in neanderthal times that became the foundations of our society.

“Everyone assumes you are made for life.”

This is another reason why you feel you have no-one to turn to. People assume you are doing OK, you’re a success. Why would they want to hear your problems? Won’t they just think you are an over-privileged whinger? If you talk to them then they’ll say you should think yourself lucky, just suck it up and get on with it because there are people who have it much harder than you. Why would they be empathetic to you?

When you’ve had a decent career and had a comfortable life so far, people assume that you are going to be fine, that you’re well-set financially and you’ll get another job or find something to do. Besides, you have that big fat redundancy cheque to last you.

It doesn’t occur to them that the reality could be very different, that your commitments are substantial and that redundancy money won’t last long, that your pension pot is not nearly enough to fall back on, either now or when it’s actually time to retire. They don’t recognise the emotional and mental challenge of your situation either. Our default position is to assume that everyone else is doing OK, probably better than us, until we find out otherwise.

So now we feel there is nowhere to go and this adds to our shame. How can we presume to share our problems with others? We should not be moaning to them, we should not be struggling. We tell ourselves that we should man up, suck it up and get on with it.

“It’s not just the financial situation, it’s the mental battle I am facing at the moment. I am usually an optimistic person, but …”

This is something that we really don’t talk about enough and so I am grateful for Gail’s honesty here (she has spoken about her struggles with depression before). This transition is a major psychological challenge for all the reasons I have discussed above.

Financial issues in particular cause us problems because we process them in the amygdala, the primitive part of our brain that deals with emotions. When we face financial pressures we actually react to them as physical threats. That triggers our flight-or-fight response, flooding out body with cortisol and adrenaline. At this point our reasoning mind has been totally bypassed and we are responding emotionally rather than rationally. It is basically making us stupid.

Our normal state is irrelevant in this situation. Gail’s optimism is being overwhelmed by her amygdala and the feelings of high anxiety and high alert it is creating. In a state of permanent high alert, we are looking out for danger and things that could kill us. Again, our response is at odds with our self-image, which causes further distress.

“Another rejection, another ‘not making the interview’, and all my demons come back to haunt me.”

We are in a fragile emotional and mental state so we are hyper-sensitive to any rejection or failure.  This kicks of the scripts of self-flagellation that we all know so well, that we have been conditioned to have running in our minds.

“I have nothing to offer.”

This is when we need the support of people who believe in us, of people who are empathic and who understand what we are going through. Without these then it is to easy for our demons to return and to drag us down and make us less than the person we really are.

Gail Emms’ situation is one that many, many people will recognise and understand. The struggles that she described, the emotions that she expresses, will be familiar to anyone who is transitioning from one career and lifestyle to another, or going through any other major life transition. Her article and comments certainly resonated with me and my struggles to transition from corporate life.

I applaud Gail for speaking up and helping to start a conversation about these challenges. She has also taken the very first step to solving her problems by reaching out and asking for help. This is an incredibly difficult thing for many of us to do and it takes real courage. She has spoken of her shame and so loosened it’s grip on her. She has opened a door for other to pass through.

I found this the saddest thing that Gail has to say. How desperate, how dispiriting, how isolating to feel that there is nowhere and no-one that you can turn to, nowhere to take your troubles and get some help in finding the answers.

It’s also one that I can completely identify with. It’s the reason that I started After the Mothership, so that people in this situation would have somewhere to turn to. So that no-one would have to feel that alone and that helpless but instead be able to find empathy, advice and the companionship of people in the same situation.

Get Involved with After the Mothership

There are three specific things that I am doing with After the Mothership to help people through their transition.

The first is to write about the challenges and ways of addressing them, in my blog, newsletter and in articles. You can sign up for my newsletter.

The second is to gather people together and create a safe space where you can work through these issues, connect with some like-minded people and fellow travellers, and get and give support. I am running regular monthly events in London, you can get tickets for the September event here.
(There will be further initiatives to connect people, so sign up for the newsletter to keep in touch with the latest developments.)

Finally, I coach people through this transition process so that they can create a new lifestyle as quickly as possible.

P.S. Since the article, a number of people have contacted Gail with offers to help (well, according to her twitter feed!). There have been some snarky comments too but, on the whole, she had a really positive response.